NOTE: You can read more details on each point by scrolling down to the "Background Information" section under the graphics on this page. 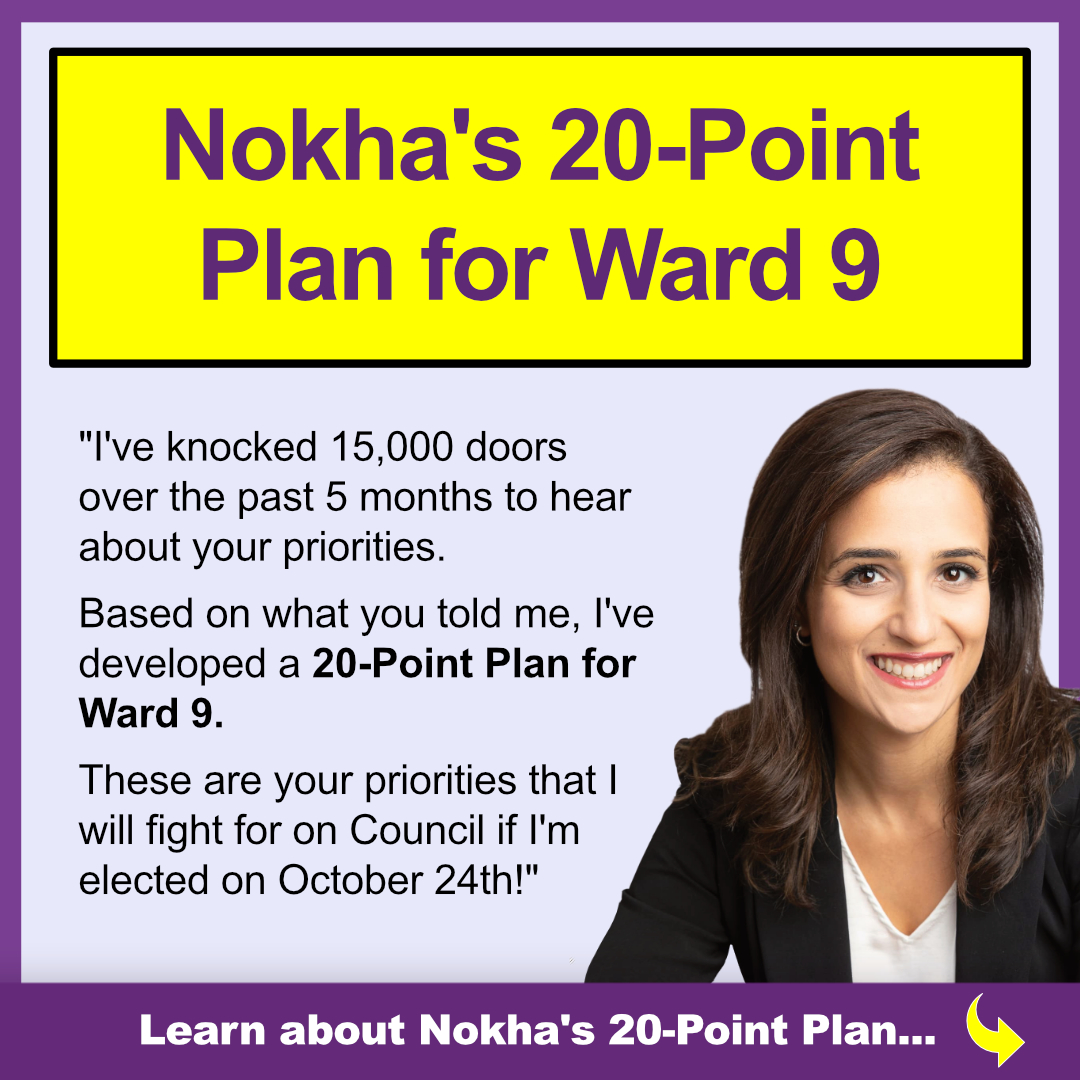 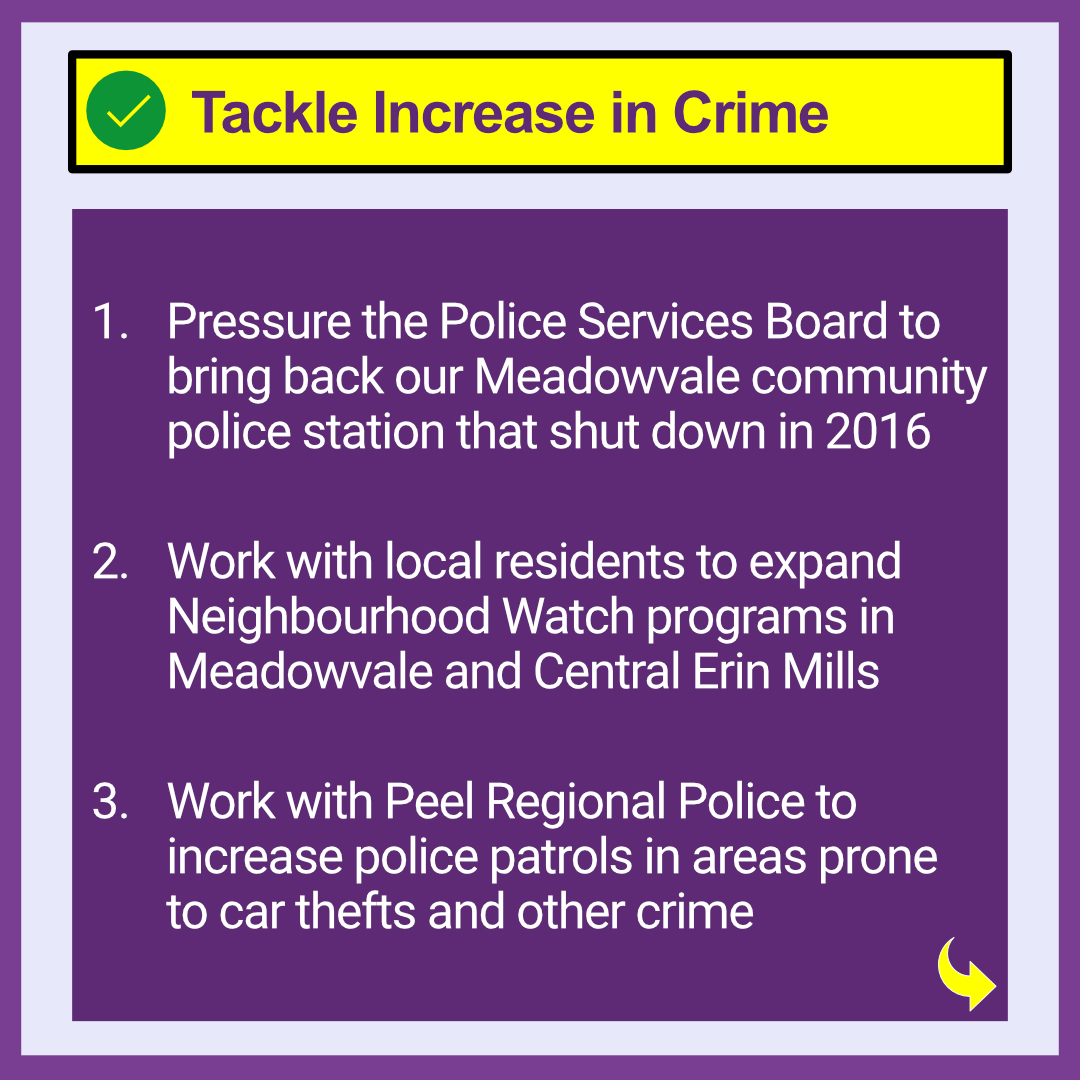 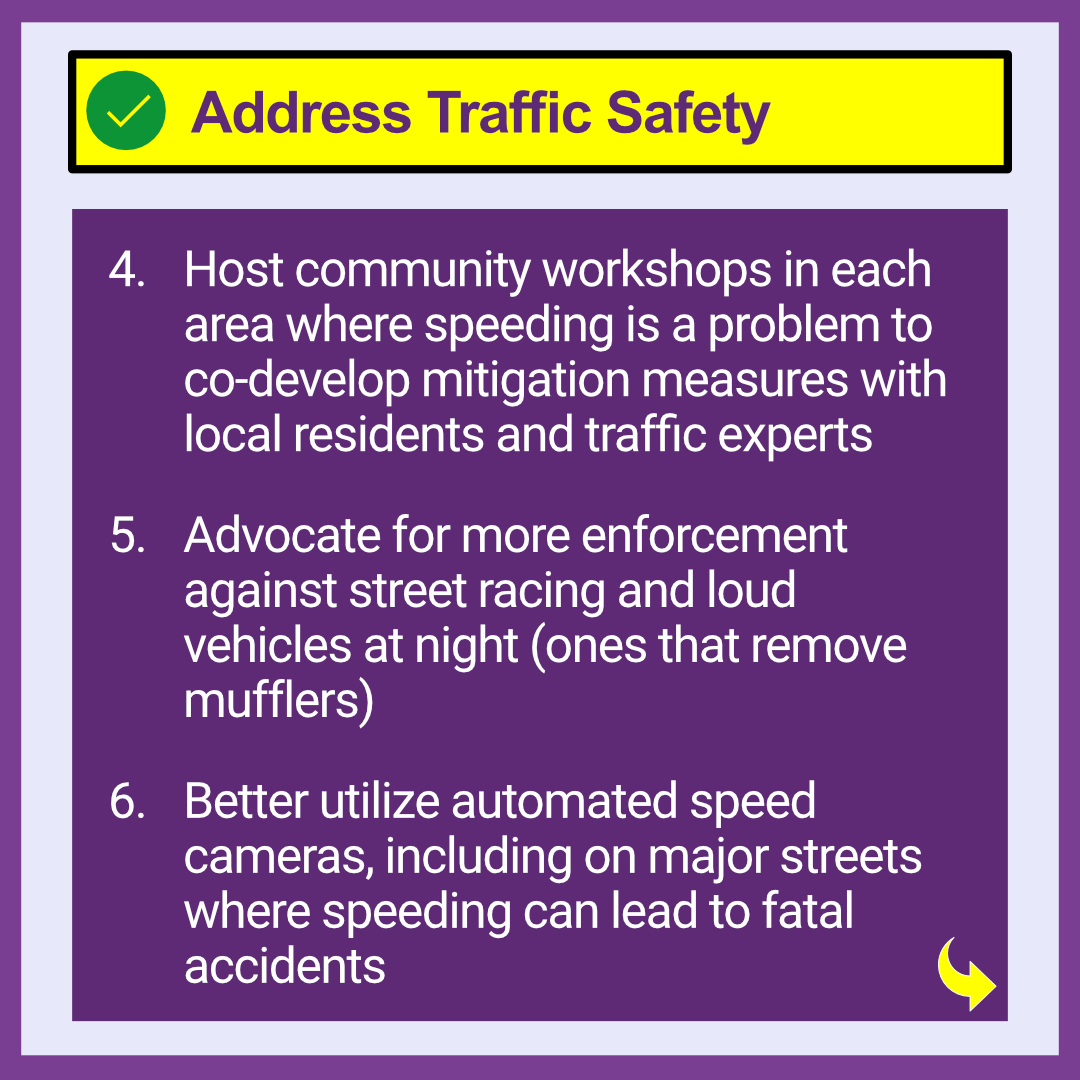 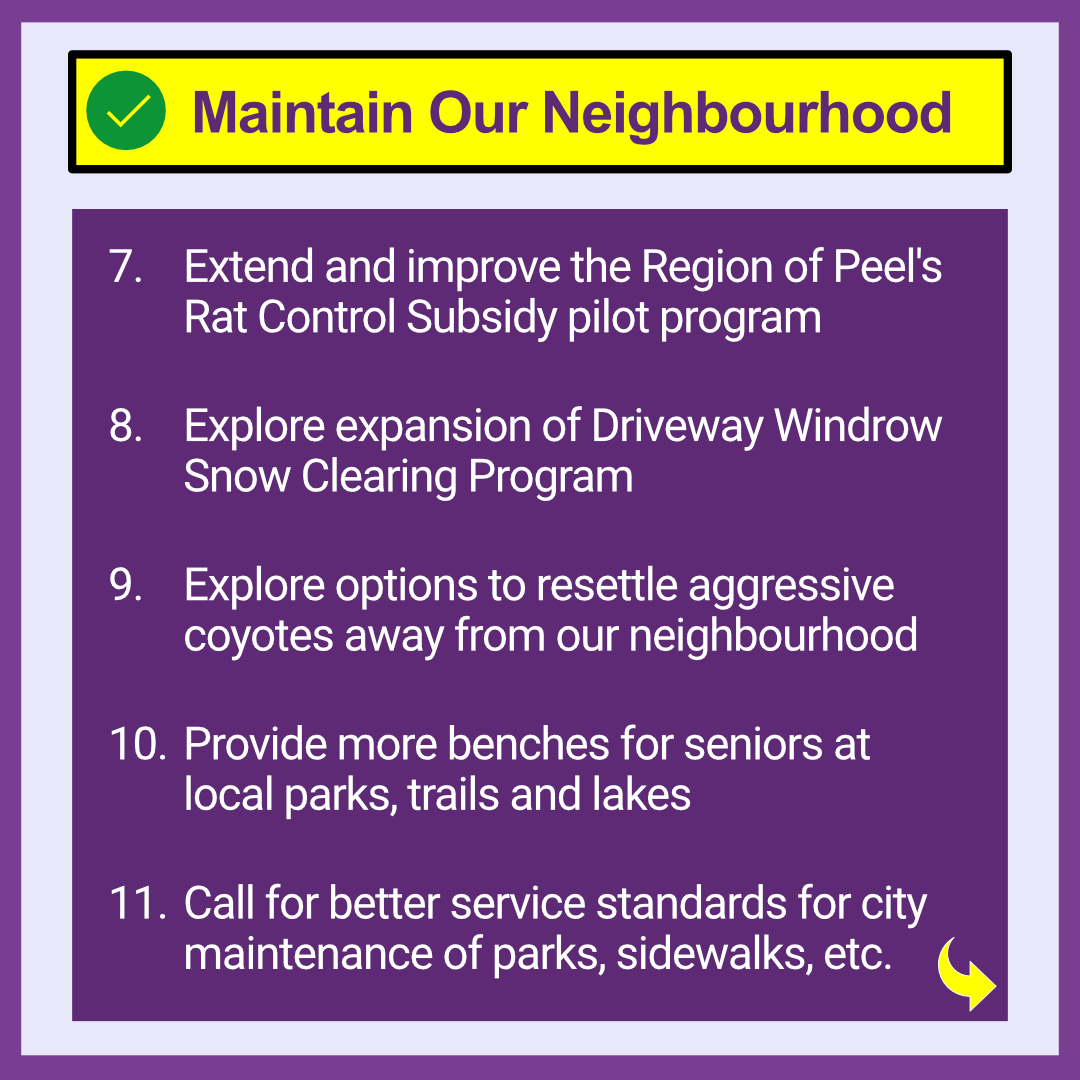 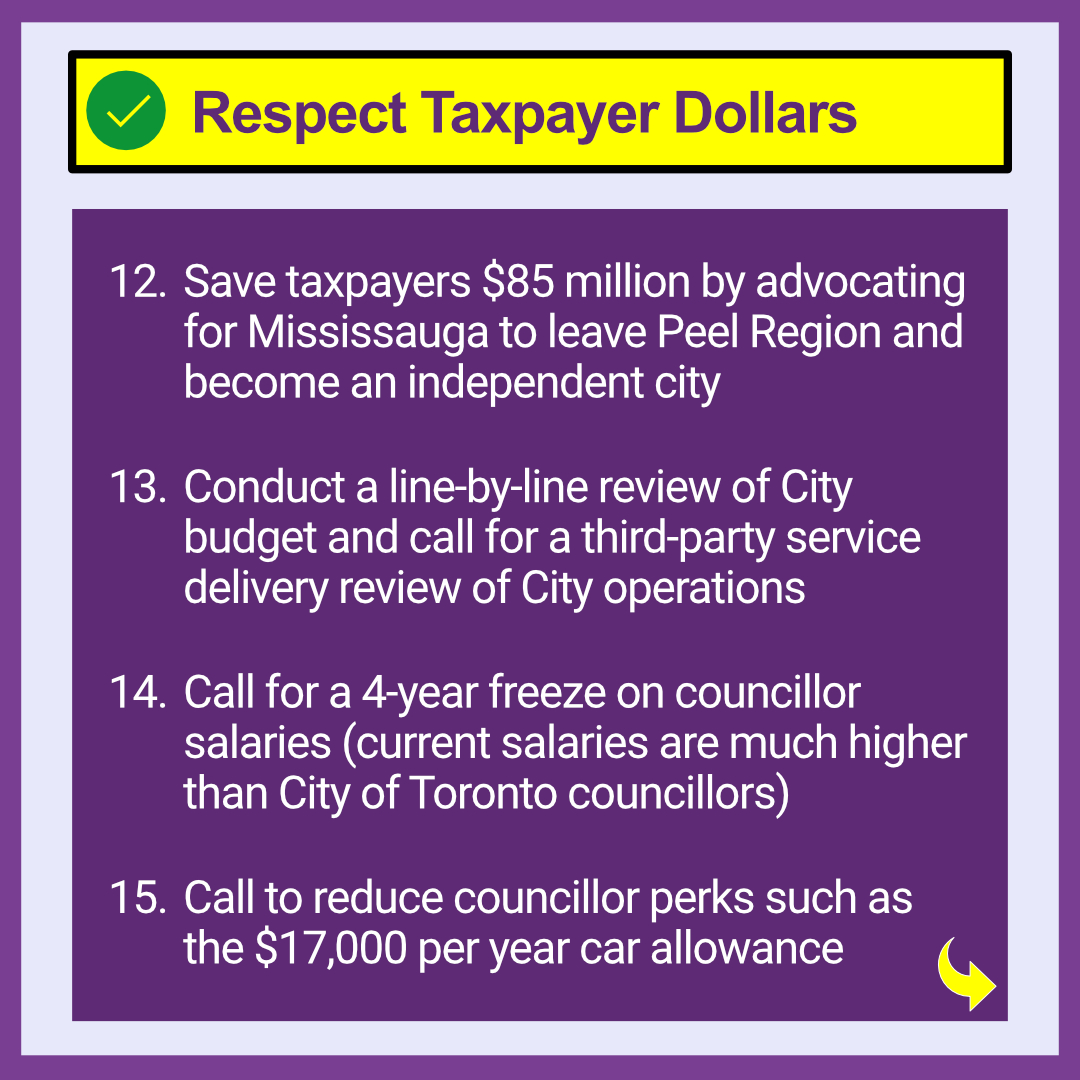 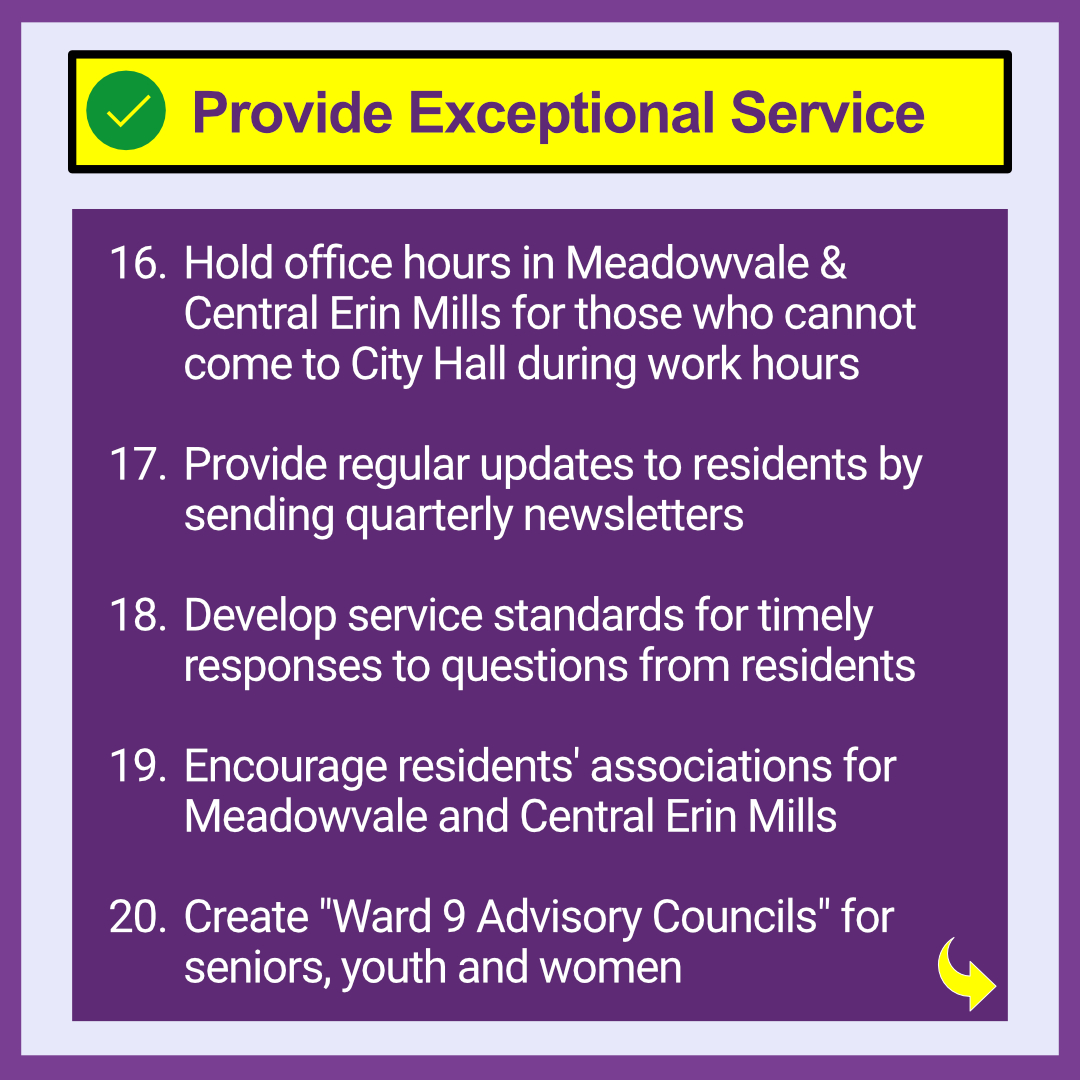 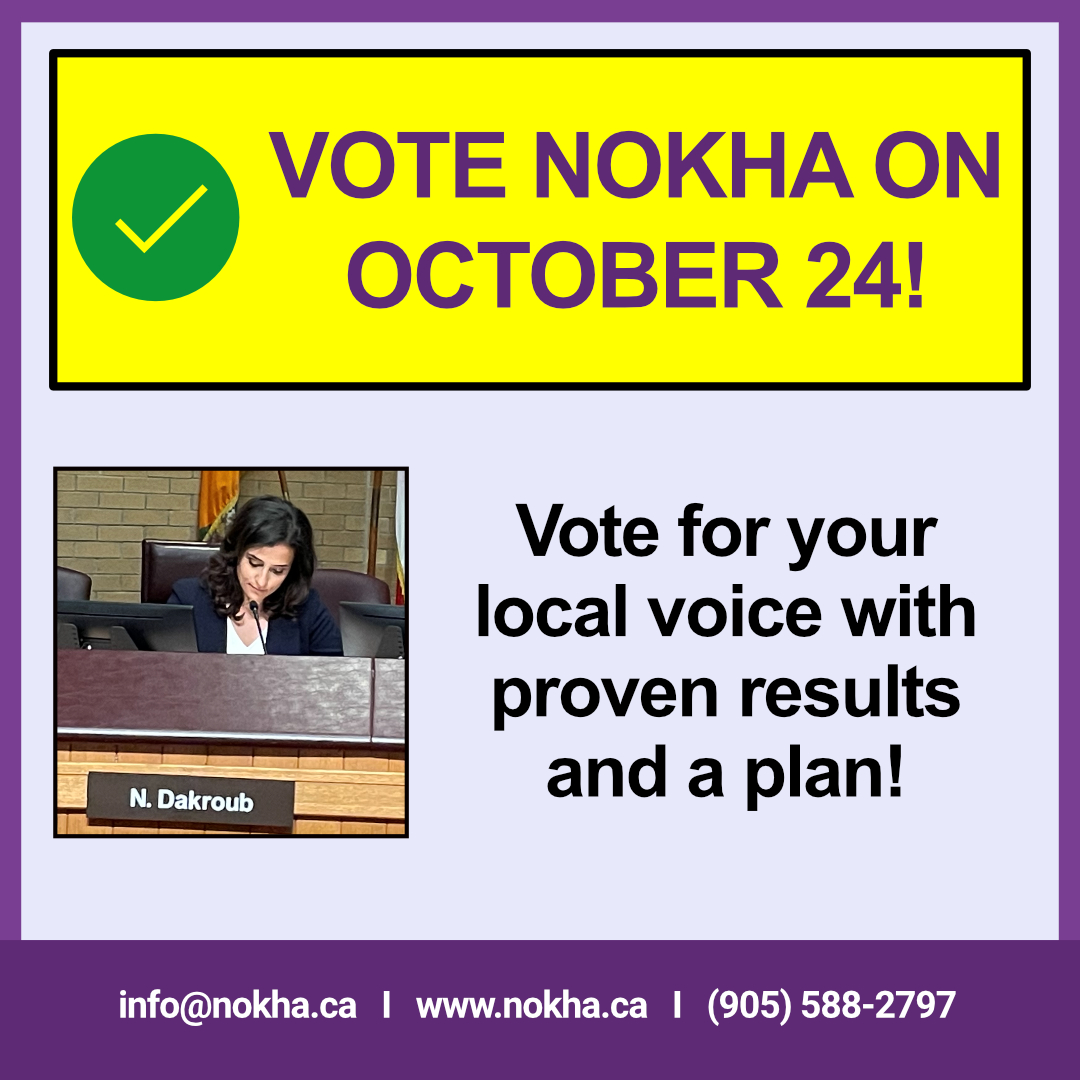 I've been knocking doors for 8 years in Ward 9.  Even between elections, I often knocked doors to provide residents updates on school board activities and other matters.  Five months ago, I started a new journey, knocking doors for my City Council campaign.  I've now knocked 15,000 doors across Meadowvale and Central Erin Mills over the past few months.

The main question I asked every single person is, "what are you priorities for our neighbourhood?, do you have any concerns or issues that you would like the next councillor to work on?".  Based on the feedback I collected from those conversations, and email surveys, I've developed a 20-Point Plan for Ward 9.

Some of these points are ones I can do by myself (i.e., local office hours), while others may require the entire Council to support (i.e., changes to programs or freezes to salaries).  For each point, my commitment is to do my very best to advocate for these priorities and report back on the outcomes to Ward 9 residents.

These are not my personal priorities.  These are the priorities of Ward 9 residents!  They told me to work on these issues.

After knocking 15,000 doors in Ward 9, the one message I received loud and clear is that we need to do a lot more to tackle the increase in crime.  Neighbours are concerned.  We have had at least 7 shootings in Ward 9 this year alone.  Over 200 cars were stolen in a 30-day period from July to August in our City.  Words of sympathies aren't enough.  We need real action.

1. Pressure the Police Services Board to bring back our Meadowvale community police station that shut down in 2016

3. Work with Peel Regional Police to increase police patrols in areas prone to car thefts and other crime

Traffic safety came up as an issue on most streets in our community.  It was especially prevalent when I was talking to neighbours on arterial streets (ones where the inner crescents branch out from) and around school zones.

4. Host community workshops in each area where speeding is a problem to co-develop mitigation measures with local residents and traffic experts

5. Advocate for more enforcement against street racing and loud vehicles at night (ones that remove mufflers)

6. Better utilize automated speed cameras, including on major streets where speeding can lead to fatal accidents

Another theme that came up in my conversations over the past 5 months was around maintaining our neighbourhood.  This included everything from snow clearing to coyotes to parks and trails, and even addressing rat infestations in our community.

9. Explore options to resettle aggressive coyotes away from our neighbourhood

As I knocked on doors over the past 5 months, Ward 9 residents asked me to work on many things that will cost us money.  However, I don't support excessive tax increases.  Residents want more services, but they also want us to keep taxes low.  We need to think out-of-the-box to find savings and more efficient ways of delivering services so we can prioritize the extra money on the new investments our residents want.

12. Save taxpayers $85 million by advocating for Mississauga to leave Peel Region and become an independent city

14. Call for a 4-year freeze on councillor salaries (current salaries are much higher than City of Toronto councillors)

15. Call to reduce councillor perks such as the $17,000 per year car allowance

At the end of the day, the job of a councillor is about customer service.  The councillor works for you!  They are your voice at City Hall.  They need to be accessible to you and ensure you are kept up-to-date and engaged on key issues.  Many neighbours told me they appreciated our previous councillor's prompt responses and availability.  They asked me to not only continue that but also proactively reach out and try to engage all groups in our community.

16. Hold office hours in Meadowvale & Central Erin Mills for those who cannot come to City Hall during work hours

18. Develop service standards for timely responses to questions from residents

These 20 priorities are a start of a conversation.  They are not meant to be the only issues I would work on if I'm fortunate to be elected as our next City Councillor.  They come from the thousands of conversations I've had at the doors over the past 5 months.

I want you to reach out to me if you have any other priorities.  Or, even if you disagree with any of these priorities, I want to hear from you!  Both now, and if I'm fortunate to win on October 24th.

Please email me at [email protected] at any time.